Hello, fellow 07scapers. Today I’m going to share with you my experience in Old School RuneScape. Something that happened to me, something rather tragic and I hope that you will learn from it and will not be as naïve as I was back in the day…

Why Make OSRS Money at All

To begin with, I must say that this is a confession of sorts: I was really embarrassed about what happened and hesitated to share it with anyone. Even my current RS girlfriend learned about it recently and if not for her encouraging words, I would not be sharing this story.

As a newb in OSRS, I always aspired to achieve great things so that my name would forever be immortalized in the annals of Gielinor. I looked at fellow adventurers in full Dragon or Justiciar gear with admiration as their gear alone stood as a proof of their dedication and bravery.

I never had enough money to buy Old School RuneScape gold, so my dreams felt unachievable. There were many OSRS items that I dreamed of, but what caught my eye the most was Gilded armor set. The first time I glanced upon it, I thought I would not regain my sight, for its flashiness blinded me.

That moment I realized that I wanted to get my hands on such armor myself. What I didn’t know back then is that Gilded armor costs an arm and a leg.

Once I learned how costly Gilded armor is, I set my mind on one thing and one thing only –acquiring as much RuneScape gold as possible. I realized I needed to accumulate a real fortune and I began working towards achieving this objective.

At first, the naïve newb that I was, I tried slaying Goblins for profit because you see, they drop gold coins. I started thinking that this method will take me an eternity and a half to earn enough gold to be able to afford Gilded set and doubt began to set in.

I hesitated more, was stressed and anxiety was eating at me. At the lowest point in my grinding days, a guy showed up and asked me what was I doing slaying all these Goblins. Our brief conversation went like this:
Him:

After the exchange he vanished just as mysteriously as he had appeared, just popped out of reality. I went to the nearby massive improvised cow slaughterhouse a.k.a Lumbridge cow field and from fellow adventurers, I have learned what “Ge” was and how do I sell stuff there.

A few days passed and I was already making money, a lot more than I was by slaying Goblins. My trips to the Grand Exchange were as regular as my bathroom breaks. On one of such trips (to the GE, not the bathroom) I met the same guy who in the past suggested I go and sell cowhides on the GE.

Before I had time to brag about how well-off I’m now, he apologized for being rude and congratulated me on my success in making gold. We started chatting about this and that and he hinted that he knows of a money-making method that only a few uses, hence it is very lucrative. I should’ve known better than to judge someone by their looks, but in my defense, he wore this outfit:

In other words, he looked like a real PIMP – Person Indicating Money-Making Prowess. I wished to make gold badly, so I asked about this money-making method of his.

He then responded with “a picture is worth a thousand words” and told me to follow him. I did, blindly so… He led me to Varrock sewers, opening a door here, making a turn there and I was glad he was showing the way because I would have gotten lost in this labyrinth were I to make this journey on my own. Then he commanded me to stop.

I believe we were in a corner of sorts because there was no sign of other adventurers. He asked me “Do you remember the way here?” and, as you have already figured, I responded “No”. A shiver went down my spine when he uttered “Good…” His voice suddenly turned malicious and unpleasant. He gave me a tinderbox, some logs, cooked meat, and ordered me to burn all that meat. I wanted to protest, but he just cut me short and growled “You will burn this meat and once you’re done, I will return with a fresh batch for you to burn and will collect the one you’re done with.

If you have at least a smidgen of the brain in that skull of yours, you will do as I command. Do not attempt to run, do not eat any of the meat I bring. Refuse to comply and you will rot in these sewers forever.”

Day after day, week after week I have slaved in the sewers. The mysterious guy brought me new cooked meat to burn along with logs and I didn’t know why. Why burn cooked meat? I have lost the track of time. I gave up entirely and instead of looking for a way out, I tried to at least make myself comfortable. I noticed there was fresh air coming from a crack, so I settled near it. Me giving up was paradoxically my ticket to freedom because not only fresh air but also echoes of gossip from the street reached me as well through that crack.

Most of it was useless, however, one day I’ve learned why I was being kept in the sewers doing the work that I did.

Apparently, there was a market for burnt foods, a literal black market so to speak. Some people were buying burnt foods. These cannot be sold or bought on the GE, so the whole community of these bizarre collectors relied on the network of traders who would trade personally. My seemingly pointless toil was making the mysterious man heaps of gold!

I then screamed in anger and it appears that someone on the street level heard me. Probably heard a sort of wailing, because after what could have been a few hours adventurers came, weapons and spells at the ready. They later explained that they expected to find a revenant or ghost of sorts. This friendly bunch led me out of the sewers, handed me a copy of the map, and bid me farewell.

Once freed, in time I have learned about the burnt food economy more. Turns out, these collectors buy all sorts of burnt food, but you can only intentionally burn cooked meat and chicken, that is why I was imprisoned.

Other burnt foods potentially catch a better price since they cannot be burnt intentionally, i.e. you cannot cook them twice. Therefore, if you are training Cooking, consider selling your burnt foods to these eccentric collectors instead of simply dropping them. After all, why not make money while training cooking? 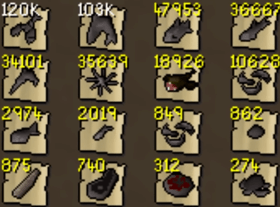 P.S. Yes, I have finally obtained Gilded set and no, the mysterious man has never shown his face to me since I was freed nor was I able to find him…

Need help with your RuneScape journey? Join our Discord server and try out our other services like OSRS questing, power leveling, fire cape, and many more.